Xiaomi’s regular channeling of Apple — from its stage presentations all the way to disguising Aperture’s icon as a phone’s camera — has earned its CEO Lei Jun the “Steve Jobs of China” nickname. Or rather, “Lei Bu Si,” a Chinese combination of “Lei” and “Jobs.” It’s also a double entendre — something along the lines of “endless shocks” — that mocks Xiaomi’s aggressive marketing. It’s no wonder Lei hates the comparison. Fortunately for Lei there’s another Chinese CEO gunning for that title. Meet Luo Yonghao, an English teacher turned founder and CEO of smartphone startup, Smartisan, with designs on being the next great tech visionary.

My first Luo experience was back in late March last year. I watched him unveil Smartisan OS, an Android ROM with a very unique grid UI, in front of over 3,000 people in Beijing. The presentation was about three hours long, but the charismatic Luo gave a thorough reasoning for every tiny detail, from his deliberate avoidance of the squircle icon to the absence of wallpaper personalization and the inclusion of intentionally out-of-sync second hands on the world clock page (mimicking real-life clocks in hotels and banks).

Unlike many execs, Luo speaks his mind, both on and off stage, with a flat tone, fast pace and sometimes deadpan sense of humor.

You’ll have to see the insanely long list of features to fully appreciate Luo’s obsession. His storytelling format and blunt criticism of others (featuring lovely words like “stupid,” “idiots” and “bumpkins”) were refreshing changes from the typical smartphone launch. For the crowd who paid to get in, they were mainly there to be humored — they loved it when Luo jokingly thanked McDonald’s for keeping his team fed during late nights. The CEO even went as far as introducing some of his single colleagues in his slideshow, in the hopes of helping them find romance. 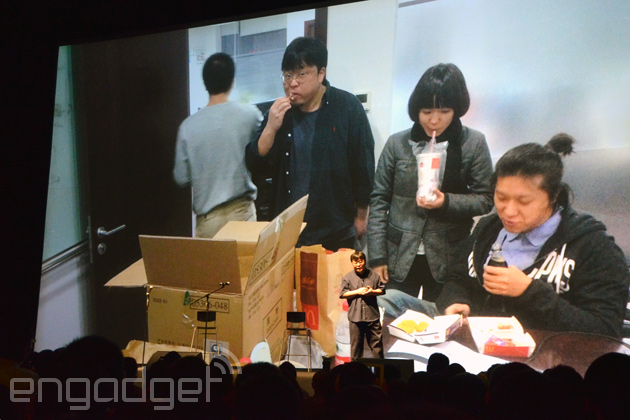 I met the chubby 42-year-old entrepreneur for the first time a couple of weeks after the show. To my surprise, he thought the launch event was a disaster: He had little time to prepare, started late, struggled on the stage and went over the original two-hour duration. Luo also admitted that the software was far from ready (and the hardware wasn’t due until a year later), but he had to show it to the world in order to keep his team of just 23 people confident. If you think he was being humble, you’re wrong. Unlike many execs, Luo speaks his mind, both on and off stage, with a flat tone, fast pace and sometimes deadpan sense of humor.

Luo and his Xiaomi counterpart share vastly different backgrounds. While Lei finished his college education and made his way up in the corporate world, Luo started off as a high school dropout, much like how Jobs was a college dropout. Luo took on odd jobs like running a lamb skewer shop, selling computer parts and reselling smuggled cars. Of course, those were far from ideal for a comfy life, so Luo taught himself English and became a teacher at Beijing’s renowned language school, New Oriental. That’s where he got his first taste of fame. His students were so amused by Luo’s bold humor and off-topic stories, that they secretly recorded his lessons and shared the audio clips online. Luo became an internet sensation, and the Chinese search engine Baidu recognized him as one of the top 10 personalities of 2005 and 2006.

After resigning from the language school in 2006, Luo dabbled in other businesses. Dissatisfied by other platforms censoring his ballsy, often critical posts about Chinese authorities, he launched a blogging platform of his own dubbed Bullog. Bullog attracted bloggers who weren’t afraid to speak up, and quickly became one of the most influential websites in China. The government eventually shut the website down three years later, but Luo didn’t fight back, because, in his words, “I had to feed my family.”

About a year before Bullog was killed, Luo co-founded and ran an English school as its principal until he started running Smartisan in 2012. Between those years, he also managed to squeeze in some side projects. He published an autobiography, hosted a popular series of talks about his entrepreneurship, organized a fridge-smashing protest against Siemens for refusing to fix loose doors, and acted as a copyright activist for Beijing-based font studio MakeFont. Perhaps most notably, Luo wrote, directed and even made a cameo in a micro movie.

I encountered Luo again this past March, two months before the Smartisan T1’s unveil. By that time, Smartisan was already occupying some of the floors in Motorola’s Beijing headquarters. The meeting rooms were buzzing with life, and Luo came out to greet me at the elegantly refurbished reception area before taking me to a much quieter floor with desks soon to be occupied.

“After the software unveil, recruitment and funding were a lot easier,” said a cheery Luo. Smartisan now employs about 350 people, many of whom are ex-Motorola staffers. 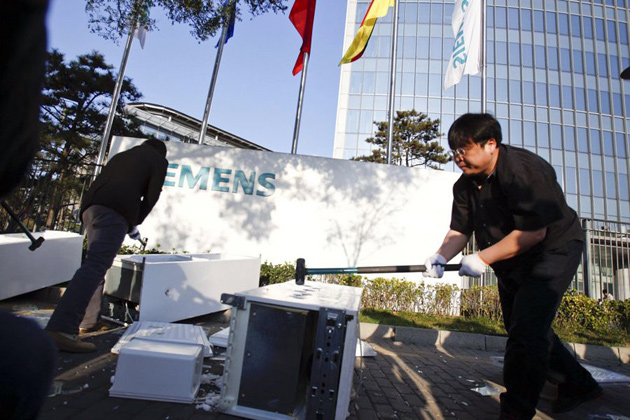 But that smile hides Luo’s craftier side. A few days before we reconnected, he was approached by Meizu’s Vice President Li Nan, who made an offer to acquire Smartisan. Given Meizu’s history and Luo’s celebrity status, it would have been an interesting combination; but despite Luo’s public endorsement of his rival company’s craftsmanship, he kindly rejected the offer.

Luo would later tell me about his bizarre encounter with Meizu, but unbeknownst to me, he’d already shared it on Sina Weibo — a Chinese Twitter-like platform where he often interacts with fans, friends and enemies. Luo lost his cool, calling Meizu’s Li a “temporary worker,” as a mocking reference to CEO Jack Wong’s 10-year absence prior to his return to office earlier this year. That said, it seems that Luo had successfully embarrassed his rival here, albeit in a not-so-classy way.

In May, I joined some 5,000 people in Beijing (plus 2.74 million online viewers) to witness Luo’s much-anticipated launch of his first smartphone, the 3,000 yuan (about $480) T1. To put that into perspective, Xiaomi’s recent launch of the cheaper Mi 4 hosted nearly 4,000 people at the same venue. This time, Luo managed to condense his presentation down to two hours, still managing to pack in plenty of surprises. Most impressively, the CEO employed former Apple designer Robert Brunner, the same guy behind the Beats branding and designs, to craft the phone’s hardware and packaging. 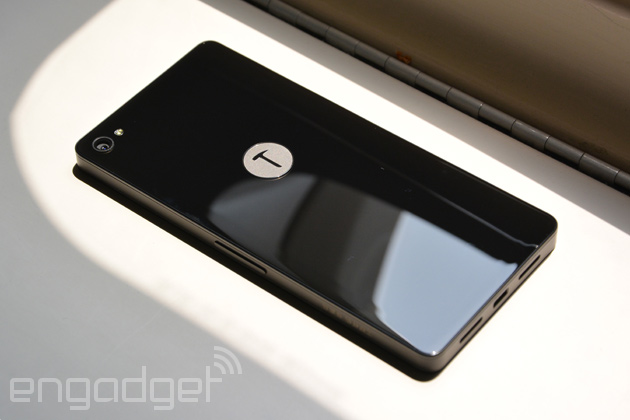 As at the Smartisan OS launch, Luo patiently detailed the T1’s design, from the tidy positioning of the front sensors to the symmetrical button arrangements and the customizable hard Android buttons. Later, Luo showed off this thoughtfulness by offering a 200 yuan (about $30) “SmartCare+” warranty, which gets you two free front or back glass-panel replacements within a year. He even bought the t.tt domain name (at a rumored cost of $325,000) to save us the hassle of spelling out Smartisan.com.

When I went to see him backstage after the show, he was mumbling to his colleagues about how he should have focused more on the software. Luo looked tired, but he was gracious enough to have a chat with me. He reiterated that he plans to enter the overseas market in a year or two, but before that, he’ll need to acquire some design and technical patents for the sake of self-defense and learn some slang for his English presentations.

“What I see in Apple is that its success model can be easily replicated,” Luo said. “Everyone thinks Steve Jobs’ feat can’t be reproduced, but I think it can be. The premise is: Can you find the person who has what it takes to tackle the core elements? If you can, then I don’t think there’s a problem.” 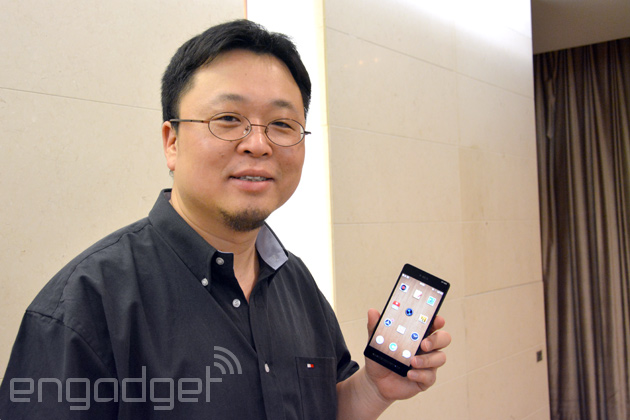 According to Luo, he has all the right ingredients to be the next Steve Jobs. He’s spent years studying industrial, UI and human-interaction design purely out of interest; he ran a business for three years that apparently generated a $2.76 million annual revenue; and he’s passionate about gadgets and arts — alternative music and woodwork, in particular.

According to Luo, he has all the right ingredients to be the next Steve Jobs.

“The idea first came to me when I had dinner with a friend almost three years ago,” Luo said. “I told him I really wanted to make a phone, and he said, ‘Why not? The only genius in this industry is Steve Jobs, and he is dead. The others are doing a sloppy job; they’re all just as bad. So why don’t you do it?’ I was moved, so I started to take a serious look at the feasibility.”

It’s still too early to say whether Luo has made it. Xiaomi’s Lei may not have Jobs’ personality traits, but he has the numbers — he already sold 26.11 million phones and thus generated a revenue of about $5.32 billion in the first half of this year. Luo, on the other hand, is currently having trouble keeping the supply chain and Foxconn’s production lines under control — he estimates it will be weeks before he reaches the desired 1,800-unit-per-day target. With the rumored 180,000 orders taken in total so far, it’s going to take Smartisan a very long time to meet the demand, let alone replace some of the faulty units from the first batch. For now, we’ll have to refrain from officially crowning him the next “Steve Jobs of China.”

And that may be for the best. After all, he’s simply known as the Luo Yonghao in China.

Billionaires editor - August 28, 2019
0
Lai Chee-Ying(黎智英), or Jimmy Lai, is a Hong Kong billionaire who owns Apple Daily. Born 1948 in an impoverished family in Canton, Kwangtung, China with family roots in nearby Shunde, Lai was...
Read more

Scandal editor - October 15, 2018
0
Lai Xiaomin (赖小民; born July 1962) is a Chinese business executive and senior economist who served as party chief and chairman of the board of China Huarong Asset Management, one of...
Read more

China democratic movement editor - August 7, 2017
0
Tang Baiqiao (唐柏桥; born August, 1967) is a Chinese political dissident from Hunan province who led student protests during the 1989 democracy movement. After the incident at Tiananmen Square, Tang fled from agents of the Communist Party of China who...
Read more

Billionaires editor - August 8, 2020
0
People on a Chinese microblogging site called ByteDance CEO Zhang Yiming a traitor, a coward, and an American apologist after the company confirmed it is the possibility...
Read more