Deng Yaping (邓亚萍; born February 6, 1973 in Zhengzhou, Henan) is a Chinese table tennis player, who won eighteen world championships including four Olympic championships between 1989 and 1997. She is regarded as one of the greatest players in the history of the sport.

Deng began playing table tennis at age of five, and four years later she won the provincial junior championship. She was age 13 when she won her first national championship.

Despite her success, she was initially denied a spot on the national team because she was so short (she stood only 1.5 metres [4 feet 11 inches] tall). She was finally included on the national team in 1988. She teamed with Qiao Hong to win her first world championship title in the women’s doubles competition in 1989. Two years later in 1991, Deng won her first singles world championship.

When she retired at the age of 24, she had won more titles than any other player in this sport, including four Olympic gold medals, and had been World Champion 18 times. From 1990 to 1997, she retained the title of world No. 1 ranked female table tennis player for 8 years. She was voted Chinese female athlete of the century, and joined the International Table Tennis Federation Hall of Fame in 2003.

From Fame to Shame

After retiring at the end of the 1997 season, Deng served on the International Olympic Committee’s ethics and athletes commissions. She is also a member of the elite Laureus World Sports Academy, and a member of the Chinese People’s Political Consultative Conference.

She gained a bachelor’s degree from Tsinghua University, a master’s degree from the University of Nottingham, and as of March 2006, was continuing to study for a PhD. in Land Economy at the University of Cambridge (Jesus College). Her research work coincides with her professional focus on the marketing, management and development of the 2008 Beijing Olympics as a member of the Beijing Organizing Committee.

In 2007, she married Lin Zhigang, also a table tennis player, and later gave birth to a baby boy.

In 2008, she received a PhD degree from Cambridge. Her thesis title is: “The impact of the Olympic Games on Chinese development: A multi-disciplinary analysis”.

In 2010, she attracted controversy due to comments she made. A student asked her, “how can one get promoted quickly?” She answered, “when your personal value overlaps with the interests of the state, your value will be enlarged without limit.” Later, she also said, “In the 62 years since the establishment of the People’s Republic of China, the People’s Daily have not published a single piece of fake news.”

I am Chinese, insists table tennis queen Deng Yaping as she posts photos of her and France-born son’s passports 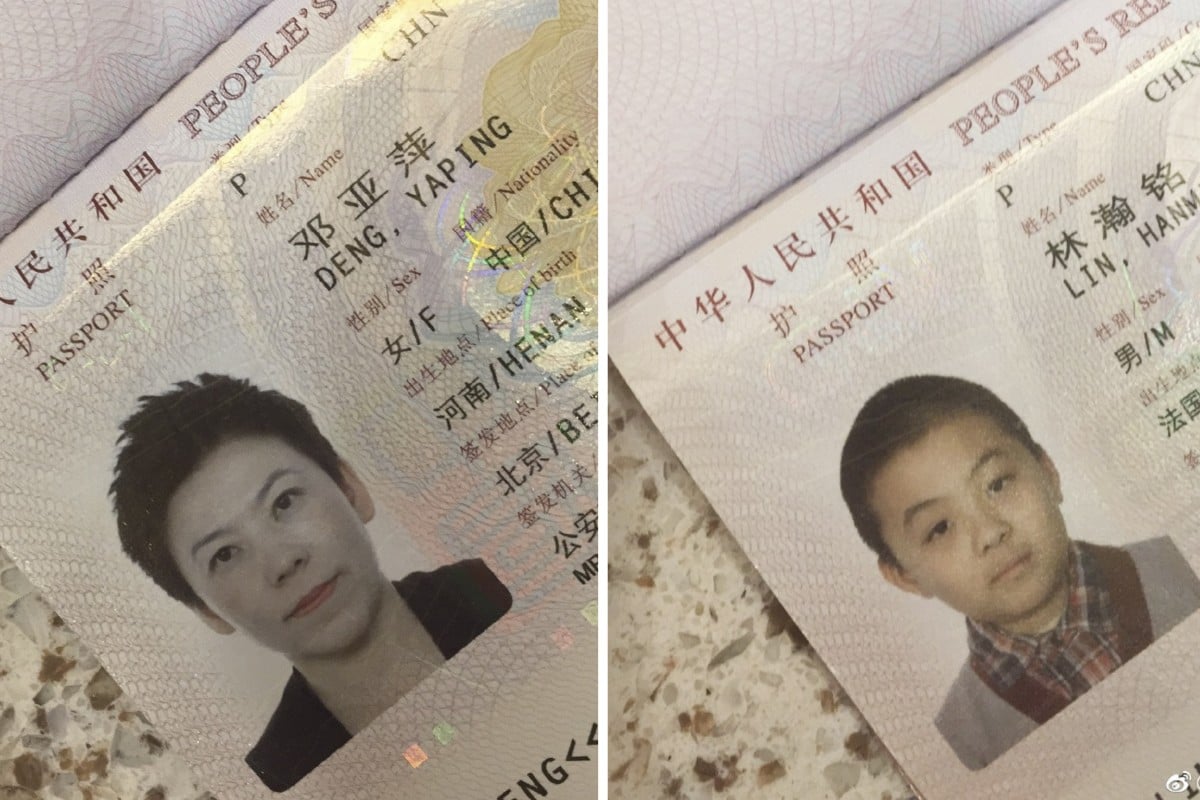 Deng Yaping posted photos of her and her son’s passports on Sunday, saying both of them had always been Chinese nationals. Photo: Weibo

The former table tennis champion Deng Yaping has posted photographs of her and her son’s Chinese passports on social media to try to put a stop to years of questions about their nationality.

In a post on Sunday on Weibo, China’s equivalent of Twitter, Deng said she wanted to dispel a long-standing rumour about their status.

“I hereby declare that I and my son Lin Haoming have always been Chinese nationals. Even though he was born in France, he got a Chinese passport as soon as he was born,” she wrote. “We are proud as Chinese and proud to be fighting for our country.”

She included photos of her passport and that of her son, along with their French visas, which show that they are not French citizens.

Regarded as one of the greatest table tennis players, Deng won six world championship titles and four Olympic gold medals between 1989 and 1997, before retiring from the sport and completing a doctorate at Cambridge.

She and her husband Lin Zhigang – also a table tennis player – had their son in 2006, in Paris – prompting questions about the family.

The boy’s birthplace, impressive pedigree and growing reputation in junior table tennis have led some to argue that he should not be lost to a foreign country, despite him now living in China.

“Whether she is a Chinese national has nothing to do with you, and it’s her own freedom, don’t morally kidnap her,” one person wrote under Deng’s post.

“It doesn’t matter what nationality [Deng] is, [she] has won honour and glory for the country and is an example to the Chinese,” another wrote. “Those who are judging her have never done such things, and stand pointing fingers.”

It has become routine for the Chinese public to criticise celebrities for their connections to other nations, with television personalities, actors and athletes all coming under fire.

He Zhili, a table tennis teammate of Deng’s, later became known by her married Japanese name of Chire Koyama and represented Japan, playing against Deng and defeating her in 1994. She was called a traitor by many members of the Chinese public.

Scholars editor - March 26, 2019
0
Xu Zhangrun (许章润; born 1962) is a Chinese jurist. He is a professor of Jurisprudence and Constitutional Law at Tsinghua University, and a research fellow with the Unirule Institute of...
Read more

Celebs editor - September 9, 2018
0
Feng Xiaogang (冯小刚; born 18 March 1958 in Beijing) is a film director, screenwriter and actor. He is well-known in China as a highly successful commercial filmmaker whose comedy films...
Read more

Scholars editor - March 30, 2019
0
Gordon Guthrie Chang (章家敦; born 1951) is an American columnist, blogger, television pundit, author and lawyer. He is widely known for his book The Coming Collapse of China (2001), in which he wrote...
Read more

Celebs editor - January 27, 2017
0
Hu Shuli (胡舒立; born 1953) is the editor-in-chief of Caixin Media. She is also the professor of the School of Communication and Design at Sun Yat-sen University. As...
Read more

Celebs editor - May 31, 2019
2
Liu Xin is a senior host and journalist at CGTN. She joined CCTV NEWS in July 1997. For over a decade, she was one of the channel’s signature anchors, covering many major events in China and around the world.
Read more

Celebs editor - June 19, 2018
0
Zhou Dongyu (周冬雨; born 31 January 1992) is a Chinese actress, who gained recognition after appearing in Zhang Yimou's film Under the Hawthorn Tree. She was also chosen by Southern Metropolis Daily as one of...
Read more

Celebs editor - January 15, 2017
0
Zhang Ziyi ( 章子怡; born 9 February 1979) is a Chinese actress and model. She is considered one of the Four Dan Actresses of China, and the most well-known Asian actress in the West.
Read more

Scandal editor - October 15, 2018
0
Lai Xiaomin (赖小民; born July 1962) is a Chinese business executive and senior economist who served as party chief and chairman of the board of China Huarong Asset Management, one of...
Read more

Celebs editor - February 14, 2017
0
Owing to her central role in the success of the Chinese women's volleyball team in the 1980s, Lang Ping was seen as a cultural icon and is...
Read more

Billionaires editor - August 28, 2019
0
Lai Chee-Ying(黎智英), or Jimmy Lai, is a Hong Kong billionaire who owns Apple Daily. Born 1948 in an impoverished family in Canton, Kwangtung, China with family roots in nearby Shunde, Lai was...
Read more